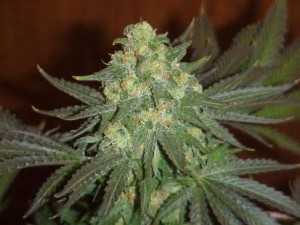 Why this weed was named after a Russian assault rifle ubiquitous in the World’s trouble spots remains a mystery. Perhaps it’s a metaphor for the potency of AK 47 weed, as potent it definitely is!

First introduced in 1992 in the Netherlands, this hybrid of Afghani Indica and Thai Sativa has won more than its share of High Times Cannabis Cup awards. In 1994, it was 3rd overall and 2nd in the Hydro section, also placing third in the Hydro section in 1996. Presumably its two second places, in the Sativa section in 1999 and the Indica section in 2003, reflects the fact that the AK 47 strain is a good balance between the two main types of marijuana.

The AK 47 strain smokes with a strong skunky smell and flavor, combined with sweetish notes of exotic spices and sandalwood. It gives an immediate soaring, euphoric high followed by introspection and couchlock. Medical dispensaries recommend it for period pains, stress and insomnia.

The plants grow to a medium height, around 100 to 150 centimetres in a controlled indoor environment. They are less leafy than some types while producing an abundance of fat, dense buds covered with glittering crystals. Outdoors, the plants will grow taller. AK 47 grows with a powerful and pervading odor and THC levels are around 20 percent or a little higher.

As its two prizes in the Cannabis Cup Hydro section testify, AK 47 seeds grow well with hydroponics. Flowering time is eight to nine weeks and yields are nicely between 350 to 500 grams per square metre.

Outdoors, the more sun the plant gets, the better it will do. Having said that, it’s a good choice for outdoor growing in more northerly climates.

AK 47 weed has been one of the most popular skunk-type weeds for many years now and it’s widely grown by both commercial and domestic cultivators. It’s a dependable strain, quite easy to grow and produces good yields with consistently high THC levels.