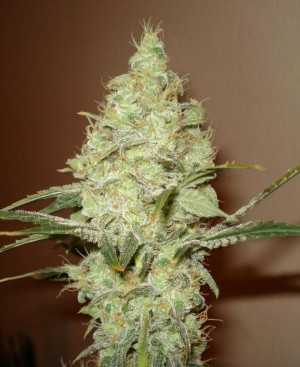 White Russian weed is the product of a horticultural marriage between two highly regarded strains, AK 47 and White Widow. Both of those have been previous award winners in the High Times Cannabis Cup, and their spinoff has continued the success with a first place in 1996’s Bio section and a second place in the 1997 Hydro section.

White Russian’s hit is buzzy and clear rather than heavy and lasts for two hours and more. This strain has a sweetish, skunky aroma and flavor, with a somewhat hash like aftertaste. Medically, it’s used to treat stress, poor appetite and muscular pain.

This medium-sized plant has a fairly sparse covering of leaves with a yellow-green colour but it produces a profusion of large buds with a silvery coating of crystals and reddish hairs. White Russian is noted for its high THC content, up to 22 percent.

White Russian seeds grow well with the SOG method and have a flowering period of eight to nine weeks. Indoor yields are a healthy 350 to 450 grams per square metre.

Outdoors, these plants will only thrive in a hotter climate of the Mediterranean or sub-tropical type. Harvest time in the Northern Hemisphere is in October.

To conclude this White Russian review, with its distinguished lineage, this is a firm favorite with experienced growers and smokers. White Russian weed is a good choice for beginners as it’s easy to grow, but take care when you first smoke this potent weed!