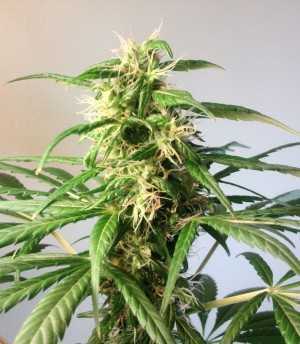 An Indica dominant weed strain, Kong marijuana was created by crossbreeding the White Russian and Bubblegum strains. The quality of both parents has been recognised at the annual High Times Cannabis Cup. White Russian took first place in 1996’s Bio section and second place in the 1997 Hydro section. Bubblegum took three prizes at the 1995 Cannabis Cup, including second place overall.

Kong weed has an earthy aroma with pine forest notes. The flavor adds notes of sweet fruit and spices, plus a hint of pink bubblegum. The high combines a sedative, physical stone with an energising cerebral effect. Medically, this weed can help with poor appetite and insomnia.

Kong marijuana plants grow to a medium height indoors, although they can stretch much taller outdoors. Plants have broad, mid-green leaves and the buds are compact, on the large side and covered in silvery crystals. THC content is in the average to high range.

Indoors, the Kong strain will thrive with either hydro or soil growing mediums using the SOG method. Flowering time is seven to eight weeks and yields are well above average, up to 750 grams per square metre.

Outdoors, Kong’s hardiness means it will grow in temperate regions as long as the summer has a regular amount of sunshine. Choose a sheltered spot to plant out seedlings after the last of the Spring frosts. Harvest in the northern hemisphere is in late September or early October and each plant will yield up to 750 grams.

If you’re looking for a high yielder with a well-balanced stone, put Kong marijuana on your shopping list. It’s quite easy to grow, so it’s suitable for novice gardeners.