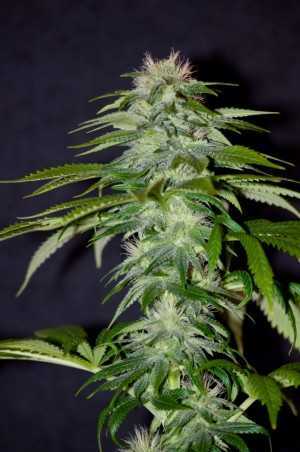 Indica dominant Burmese Kush was created in the Netherlands by crossing an original Burmese strain with the OG Kush strain from California. OG Kush is a popular weed for medical use on the West Coast of America. You’ll quite often hear the name shortened to ‘Buku’, especially in Amsterdam’s coffee shops where it’s a favorite. High Times magazine named this weed as one of the top ten strains of 2007.

It has a pleasantly smooth smoke that combines a sweet, almost candy like flavor with notes of pine and ginger. The high comes on slowly at first moving on to a relaxing, mellow sensation that makes this a great evening smoke. Medically, it can be used to alleviate insomnia, stress and poor appetite.

Its Indica heritage means that it grows as a fairly dense bush with dark green leaves to a maximum height of about 100 centimetres. It tends to produce one large calyx and it doesn’t display many branches. The dense buds grow quite large and have a visible covering of sticky resin. THC content is 15 percent.

You’ll get good results growing Burmese Kush seeds indoors using the SOG method. Flowering time is seven to eight weeks and you should see yields of between 350 to 400 grams per square metre. However, this strain is vulnerable to mould and mildew if you allow conditions to get too warm and humid.

Outdoors, the plant thrives in a sunny, sheltered spot and will be ready to harvest in late September.

If you like a sweet yet spicy flavor in your smoke, this Burmese Kush review recommends this strain. Although it’s not the easiest weed to grow, careful cultivation of Burmese Kush rewards the grower with decent yields and a very enjoyable smoke.