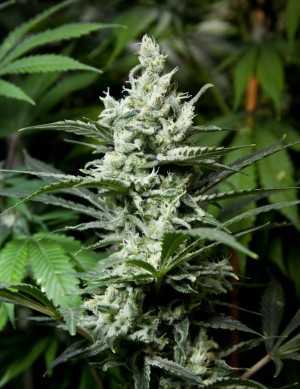 Indica dominant Crystal Weed is a cross between the White Widow and Northern Lights strains. Northern Lights is a highly esteemed strain that won no less than eight awards in the High Times Cannabis Cup in the 1990s, including first place overall in 1993. White Widow is also a highly respected strain and it’s appeared in the Cannabis Cup rankings four times with a first place overall in 1995.

Crystal weed has a pungent aroma reminiscent of jet fuel while the flavor includes notes of sweet fruit. This strain offers a well-balanced high, combining a sedative body effect with a soaring cerebral high. Medically, Crystal is recommended for muscular pain, stress and poor appetite.

Indoors, Crystal marijuana plants grow to a height of around 100 centimetres with mid green leaves. The buds are large and dense and as the strain’s name suggests, they’re covered in glittering crystals when they’re ready for harvest. THC content is in the 15 to 20 percent range.

Indoors, Crystal seeds grow happily in soil or hydro and thrive with the SOG growing method. It’s a vigorous grower, so you’ll need to trim back the leaves to keep it in shape. Flowering time is eight to 10 weeks and yields are between 400 and 500 grams per square metre.

Outdoors, Crystal will do best in a subtropical climate where it can shoot up to three metres in height and produce as much as 750 grams per plant. Harvest comes in late September or early October in the northern hemisphere.

With its distinguished parents, it’s little wonder that Crystal weed is popular with novice and experienced growers alike. Apart from the need to trim it, it’s easy to grow indoors and produces dependable harvests of potent weed.