Up until now, Dark Angel has been one of the marijuana world’s best-kept secrets and even now, it’s still one of the harder strains to find.  Word about the strain is, however, finally starting to spread and it’s finally starting to get the recognition it deserves for its great taste and strong pain relief.  A balanced hybrid, it offers high levels of both THC and CBD, hence its (growing) popularity with medical users. 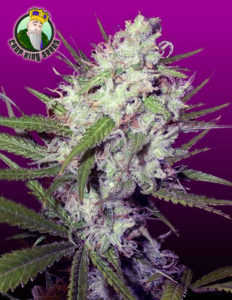 The flavour of Dark Angel is essentially that of a top-quality coffee and has notes of both spice and sweetness.  The aroma could be put in a bottle on its own.  It’s still very much based on coffee, but there’s spices and nuts in there as well along with an earthy body and real pungency.

You can expect at least 15% THC in Dark Angel, 20% is far from unusual and some sources have reported that it can go as high as 22%.  This puts it on the upper end of the sort of THC content beginners should consider.  As you would expect, the effect begins with some knockout pain relief and a powerful head high, which is known for being relaxing and meditative rather than energetic.  Those looking for a weed to get the party started should definitely look elsewhere, this is a weed to get you thinking rather than one to get you dancing.  Dark Angel also has about 1% CBD, which means that as the head high gently ebbs away, you move smoothly into a wonderful, full-body stone.  Dark Angel has built a reputation for itself as a strain which will deal with pain effectively and soothe you into the sleep you so desperately need.  It’s also noted for its results with emotional conditions, such as anxiety, stress and depression.

When it comes to growing Dark Angel, your biggest challenge is likely to be getting hold of the seeds in the first place.  This strain is a very good choice for those new to growing.  In spite of its hybrid genetics and high THC content, Dark Angel grows in the style of an Indica and is ready in a mere 8 weeks indoors, so the outdoor harvest is around mid-/end-September.  As this sort of growth time suggests, Dark Angel stays nicely compact, but still offers very decent yields with 550g/M2 being a realistic expectation indoors.  One of the reasons Dark Angel is often recommended to beginner growers is because overall it’s a fairly robust and hardy strain, but it does have to be remembered that even though many people think its aroma is delicious, the scent can still get very strong very quickly, particularly if you’re growing more than one or two plants, so in addition to taking care of effective ventilation, you’re also probably going to want to look at odour control in the form of air filters (indoors) and strategic positioning (outdoors).