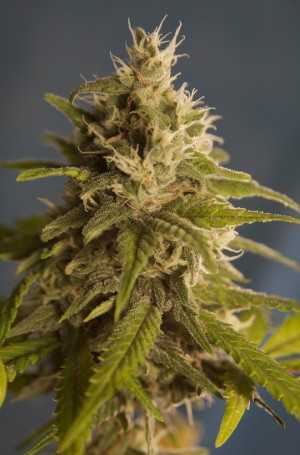 The Dr Grinspoon strain has the distinction of being the only cannabis strain named after an Associate Professor Emeritus of Psychiatry at Harvard Medical School. This pure Sativa strain was specially created to honour the real-life Dr. Grinspoon for his work over the years to counter the demonisation of marijuana.

The splendidly named Dr Grinspoon published his seminal work ‘Marijuana Reconsidered’ in 1971, writing in the introduction, ‘After three years of research on cannabis, I concluded that not only was it much less harmful than alcohol or tobacco, but also that no harm it might cause was nearly as serious as the damage attributable to the annual arrest of 400,000 mostly young people on marihuana charges.’

Dr Grinspoon weed has an earthy smell tempered by notes of lemon and spice and the flavour has tropical fruit and honey tones. The soaring high comes on quickly and, typically for Sativa types, is strongly cerebral rather than physical. In medical use it can help people who suffer from poor appetite and stress.

Dr Grinspoon seeds grow tall and spindly with quite small spherical buds that are dark green and reddish with a covering of glistening crystals. THC levels range from 20 to a whopping 25 percent.

This plant is not recommended for the novice grower since it requires careful attention to get the best out of it. Indoors, the flowering time is quite long at 12 to 14 weeks and yields are around 350 grams per square metre. Due to Dr Grinspoon’s long flowering period, you’ll struggle to grow this strain anywhere with less than a sub-tropical climate. In hot regions, outdoor harvest time comes in late October or early November.

The extra effort that the Dr Grinspoon strain requires in cultivation is well repaid by the quality of this connoisseur’s weed. Just think, every time you smoke this weed, you’re honouring one of the few members of the establishment who has rational views about cannabis.