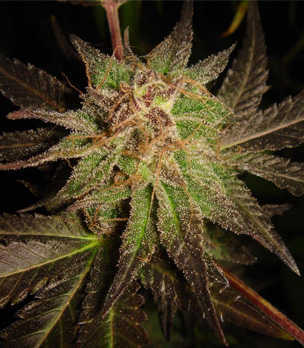 Veteran cannabis aficionados remember Durban Poison as the name of the potent weed smuggled from Durban, South Africa’s third largest city and main commercial port. Today, the Durban Poison strain on the market is a mixture of the original South African Sativa weed and early versions of hybrid skunk, with the strain still Sativa dominated.

The weed has a subtle aroma with skunky tones including notes of citrus, anise and pine, and a similar flavor that’s notable for its spiciness. Like many Sativa dominant weeds, the stone is energetic and cerebral so that’ll you’ll feel initially euphoric and then physically active. Durban Poison won third prize in the Sativa section of the 2010 Medical Cannabis Cup and is prescribed for loss of appetite, stress and nausea.

The plant grows to a height of around 90 centimetres and has branches of varying length with a thick growth of bright green leaves. The buds are elongated, and dense with a covering of white THC crystals. THC levels are in the medium range at between eight and 15 percent.

With its subtropical African origins, this weed is best grown indoors in northern climes. It responds well to the SOG method with hydroponics and offers yields of up to 450 grams per square metre. This relatively easy-to-grow strain has a flowering time of eight to nine weeks.

You can grow this strain outdoors, though the further north you are the lower the yields will be. Expect to harvest at the end of September in the northern hemisphere.

Even inexperienced growers can achieve good yields with Durban Poison grown indoors and its tendency to promote activity makes it a favorite with smokers who enjoy an energetic high.