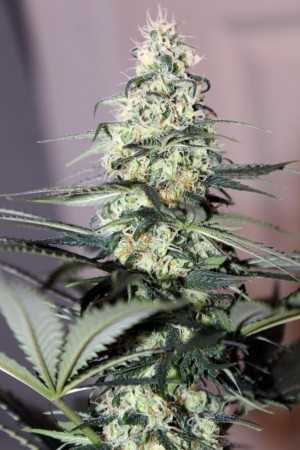 THC Snow weed is a potent indica dominant hybrid from the Netherlands created by crossing three strains, the extremely potent THC Bomb, the award winning White Russian, and the huge yielding Big Bud. White Russian has taken two awards at the cannabis cup, while both THC Bomb and Big bud have become renowned for their potency and yielding ability. The resulting strain has inherited all of the finer points of its heritage and has an ability to impress both experienced smokers and commercial growers.

The aroma is of lemon fuel with a hit of spice which is carried through into the smooth smoke. The hit comes on hard and is both cerebral and physical, but with a predominance in its sedative qualities. This weed strain is more suited to a night in front of a movie or listening to your favourite music than socialising. Medically, it is used to treat stress, poor appetite and muscular pain.

The plants grow bushy and to a medium height with wide, heavy leaves which are dark in colour. The buds tend to concentrate around a thick and robust central stem and are covered in massive quantities of crystals which extend down the leaves. The THC levels of this plant are at the extreme end of the spectrum and are consistantly measured over 20%. However, this strain has had levels recorded at a whopping 27.5%!

Indoors, THC Snow weed will thrive in either a hydroponic set up or a soil medium and flowering times are as short as six to seven weeks. Growers can expect exceptional yields of around 600 grams per square meter.

Outdoor growth is just as vigorous as long as you plant it somewhere that receives a large amount of sunlight. THC Snow can take a heavy feeding, which boosts resin production and harvests will come as early as the end of September or the beginning of October.

To wrap up this THC Snow review, this really is as an extraordinary all rounder. The good flavour and incredible levels of THC will impress connoisseurs and experienced smokers, while its ease of growth means it will thrive even in the hands of the clumsiest beginners. Commercial growers will also appreciate its impressive yields.