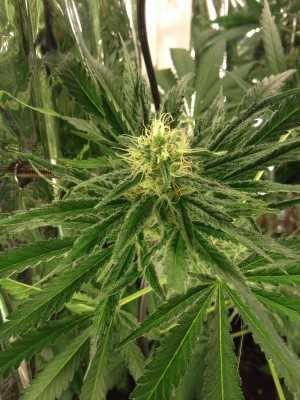 According to the fairy tale, Snow White was the fairest of them all and it is true that Snow White weed produces extremely attractive plants with a thick dusting of white, glittering crystals. This Indica dominant weed was created in Amsterdam by crossing White Widow, a Cannabis Cup winner back in 1995, with an unknown Indica type.

The bouquet and flavor of Snow White weed include a pleasing mixture of citrus, pepper and fragrant blossoms. Although the high has some typically Indica characteristics of sedation and physical relaxation, those tendencies are not overwhelming. The weed also produces cerebral effects, so this is a good high if you want to be relaxed but not couchlocked. Medical practitioners recommend Snow White for mild stress, poor appetite and relief from muscular pain.

The Snow White strain grows to between 70 and 90 centimetres tall and is quite bushy. The buds are on the large side and noticeably sticky. Their dark green colour is increasingly masked by a heavy coating of white crystals as the plant matures. The THC levels range from 18 to 20 percent.

With indoor growing, you’ll get the best out of Snow White cannabis by cultivating it with the SOG system in a hydro set up. Flowering time is eight to 10 weeks and harvests are from 400 to 500 grams per square metre.

You need the warmth and sunshine of at least a Mediterranean climate to grow this strain outdoors. Harvest in the northern hemisphere comes in the first half of October.

Snow White weed is easy to grow indoors and produces dependable harvests of potent weed. If you like a smoke that’s well-balanced in terms of physical and mental effects, this could be the choice for you.