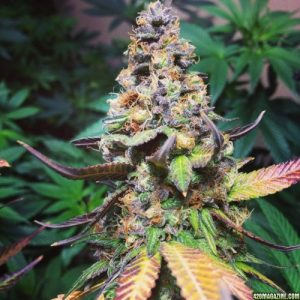 have taken their names from Star Wars.  According to internet rumour, the name “Yoda OG” refers to the fact that this strain yields up chunky, pale green nugs covered with orange hairs, although the same could be said of quite a few strains of marijuana.  In any case, it is commonly believed that the “OG” part of the name refers to OG Kush, which makes sense on several levels.  Opinion varies on the other part of the parentage, with the popular candidates being Chemdawg, LemonThai, and Old World Paki Kush.  Out of these three, we think Chemdawg is the top contender.

It is known that Yoda OG is about 80% Indica and we’ve seen claims that it can have up to 28% THC.  Standardized lab tests, however, indicate that it has an average of 14% THC with a maximum of 22% THC.  This tallies with what is known of its origins (OG Kush has an average of about 19% THC and Chemdawg typically has between 15% and 20% THC).  This is still quite enough to provide fast and effective pain relief for a range of conditions and can also help to relieve negative mental states.  The high is rather more restrained than you’d expect from a Sativa dominant with an equivalent THC level.  It is somewhat bubbly and motivational, but more about joyous bliss than rushing euphoria.  The head high then gently fades into an old-school full-body stone thanks to the 0.05% to 1% CBD.

Indoors, Yoda OG needs about 9 to 10 weeks of flowering time after which it will deliver a harvest of up to 450g/m2.  Outdoors it will be ready for harvest around early October and will deliver a yield of up to 600g per plant.  In keeping with the mysterious origins of this strain, there is no official information about its likely height but grower reviews suggest about 1M to 1.5M which, again, would tally with the OG Kush heritage.  Grower reviews also suggest that Yoda OG is nicely undemanding and robust, with solid resistance to mould, diseases and pests.  Again, this all tallies with OG Kush genetics.

With all that said, you may not be surprised to hear that the flavour and aroma of Yoda OG is very similar to that of OG Kush.  The base blends diesel and wood, there are Kush spices in the body and top notes of sweet lemon and fresh pine.