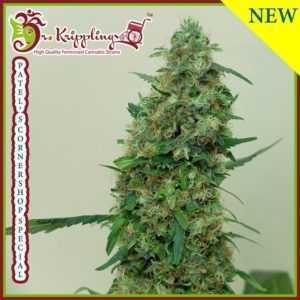 Patel’s Cornershop Surprise is known to be a cross between Delhi Friend and Patel’s OG Kush.  Dr Krippling has never confirmed the exact origins of either of these strains (as far as we know), however Delhi friend is believed to be a cross between an Indian landrace Indica and another unknown Indica while Patel’s OG Kush is believed to be a hybrid of Chemdawg, Lemon Thai, Hindu Kush and a Pakistani landrace Indica.

If you’re looking for a strain full of rich, hash spices then please move along, there’s nothing to see here.  If, on the other hand, you want delicious candy sweetness without the sugar, then Patel’s Cornershop Surprise could be the perfect strain for you.  There is an undertone of spiciness, but it’s more in the line of a cinnamon ball than the deep hashiness typical of Kush.  Interestingly the aroma is quite spicy, but there’s citrus to balance it.

With 18% THC, Patel’s Cornershop Surprise has enough power to send pain packing and deal with negative emotional states by giving you an upbeat, refreshing lift rather than a full-on high.  This strain is definitely an Indica dominant, so that lift will gradually ease back down into that classic Indica body stone, which provides total and complete relaxation to both mind and body.  Ideally you would enjoy Patel’s Cornershop Surprise in the evening.  It can do a great job of dealing with any troubles which are stopping you from getting to sleep at night.

Patel’s Cornershop Surprise was bred to be small in size and mighty in yield.  Indoors it can stay as short as 60 cm all by itself and even when it has all the space it wants to stretch outdoors, it is still highly unlikely to grow any higher than 1.2M.  Its yields, however, would be impressive on much bigger plants.  You can harvest up to 750g/m2 indoors or 650g per plant outdoors.

The really great news is that even total beginners should manage to bring in a decent crop off Patel’s Cornershop Surprise.  With the exception of Chemdawg, which can be a bit of a diva (although some more modern phenos do address this), Patel’s Cornershop Surprise is packed with robust, landrace genetics, which means not only that the result is very undemanding but also that it is very forgiving of typical beginner mistakes.  Even if you’re not a beginner, we think you’ll appreciate this strain’s all-round robust hardiness.

Patel’s Cornershop Surprise - Dr Krippling, 3.0 out of 5 based on 1 rating