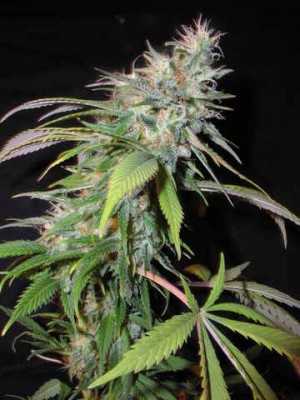 Early Misty is an Indica dominant weed combining the genetics of two strains, the original Misty and Early Skunk, and it’s been specially created for northern European outdoor growing. Misty is a mixture of White Widow, Northern Lights and Shiva, bringing a powerful genetic contribution to the table. Between them, Northern Lights and White Widow have won awards at the High Times Cannabis Cup an astonishing 12 times.

The smell is skunky with hints of hash and the flavor will remind you of a quality hash with the addition of a fruity taste with a hint of coffee. The high is mellow and will leave you fully capable of active pursuits, so this is a good daytime smoke. It isn’t commonly prescribed for medical use but should help with mild stress and poor appetite.

Early Misty seeds produce plants that grow between 75 and 120 centimetres tall with broad, mid-green leaves. The plants often grow a central cola from the main stem and the buds are dense and covered with silvery crystals. THC levels are between 10 and 15 percent.

Indoors, Early Misty seeds can be grown with the SOG method and a moderate amount of nutrients. Flowering time is seven weeks and yields are in the 375 to 475 grams per square metre range.

No Early Misty review should miss pointing out that it really comes into its own when grown outdoors in cooler regions, like northern Europe. The plants tolerate low temperatures and the only problem to watch out for is mould on the leaves, especially in wetter summers. Outdoor harvest is in September and each plant should yield around 225 grams.

Since Early Misty is easy to grow and has a satisfying but not explosive hit, it’s a good weed for novice smokers and gardeners. If you’re in northern Europe and keen to grow outdoors, this strain should definitely be on your shortlist.