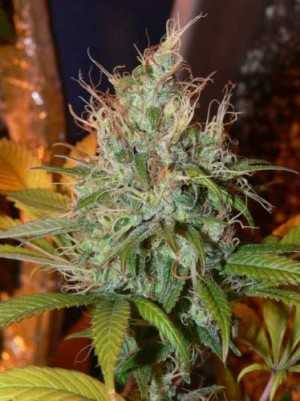 A blend of Sativas and Indicas, El Nino weed is the product of four strains, Super Skunk, Brazilian, Haze and South Indian. It takes its name from a well-documented weather phenomenon which can cause storms and high seas in the Pacific Ocean. This well-balanced strain proved that it’s one to watch as long ago as 1998 when it took first prize in the Bio section of the High Times Cannabis Cup and second prize in the overall competition.

As its name suggests, El Nino cannabis gives a powerful hit; you’ll feel very stoned as soon as you smoke it. The high is euphoric with some sedating effects, making it a good choice for a night time smoke. The flavor and aroma both have notes of tropical fruit and citrus. In medical use, this weed is recommended for insomnia and poor appetite.

El Nino seeds produce plants of medium height with a large number of side stems displaying lots of buds which are sticky and fat. THC levels have been measured at 14.5 percent.

This plant’s growing habits mean that it thrives with indoor cultivation using the SOG method. Its flowering period is eight weeks and you can expect yields of up to 500 grams per square metre.

To grow this plant outdoors you need to live somewhere with a climate at least as warm and sunny as the Mediterranean. If you’re lucky enough to be in that position, harvest comes at the end of September in the northern hemisphere and each plant should produce around 900 grams.

If you’re looking for a strain that combines Sativa and Indica qualities to produce a powerful but well-balanced hit, El Nino weed should go on your shortlist.