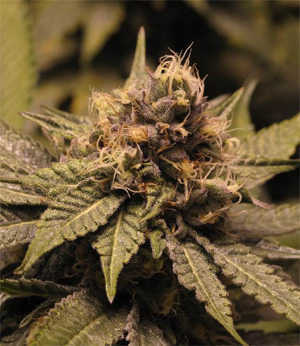 Granddaddy Purple is a product of the thriving Northern California medical cannabis scene. It’s a cross between Purple Urkle and Big Bud, winner of the High Times Cannabis Cup Indica section in 1989. It is also genetic cousins with Grape Ape.

The Granddaddy purple strain has a distinctive fruity smell and when smoked tastes of sweet grapes. Despite its Indica heritage, this weed offers much more than a heavy body stone. It gives an energetic high, one which will make you feel like going out for a stroll rather than curling up on the sofa. Medicinally, it’s good for mild pain relief and poor appetite.

Indoors, Granddaddy Purple grows short and squat, about one metre high, with lots of side stems. Leaves are dark green to start with, but become increasingly purple as the plants mature. Outdoors, the plant can shoot up to as high as two metres. The dark green buds are dense and the THC level is between 15 and 18 percent.

Indoors, Granddaddy Purple seeds grow well in soil or hydro and it is not a particularly fussy plant as long as it gets plenty of water and is maintained at a temperature of around 20 to 25 centigrade. Give it a bit of care and attention, and you can expect yields in the high range, up to 500 grams per square metre. Flowering time is eight to nine weeks.

Outdoors, the plant does best somewhere with warm sunny summers. Plant it in a rich soil and give it some support as it grows and you can harvest up to one kilogram per plant in the second or third week of October.

If you’re looking for an Indica type weed that’s not too heavy on couchlock, Granddaddy Purple is a good choice. Its high yields also make it a favourite with commercial growers.