Although Ice Wreck is technically a balanced hybrid, the THC content can be through the roof, so for practical purposes, it’s a Sativa, which is a bit on the short side.  THC levels have been tested at over 27% but for practical purposes, around 20% is likely to be a more realistic expectation.  CBD is very low, often under 1% so this is definitely a “head” strain rather than a “body strain”. 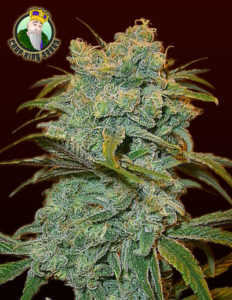 In terms of taste, Ice Wreck is a strain with a deep body, composed of earthiness and woodiness, but a touch of lightness too in the form of pine top notes, which add an edge of menthol freshness.  The pine notes are clear in the aroma, giving it a pleasing crispness.

In terms of effect, Ice Wreck delivers one mighty punch of THC and hence is a great strain for treating serious pain, such as migraines.  It’s also a solid choice for emotional conditions such as anxiety, depression and stress.  The fact that the high THC content leads to such a head rush without any significant quantity of CBD means that this strain is probably best avoided by insomniacs.

The question of how easy Ice Wreck is to grow is an interesting one.  We’ve marked it down as moderate, mainly because at this point there are only regular seeds available, which means that growers will need to sex their plants themselves and while this is straightforward in theory (and there’s lots of help on the internet), new growers may find it a challenge they could well live without.

In addition to this, Ice Wreck overall could probably be best described as “reasonably demanding”, albeit not unreasonable.  Basically Ice Wreck expects growers to dot their “i”s and cross their “t”s, when it comes to the proper growing method and she expects them to do this all through a ten-week growing period, which, these days is definitely considered on the lengthy side.  In other words, growers wanting to make a success of Ice Wreck need to be absolutely on point when it comes to managing light cycles (and colours), watering, nutrients (this is a strain which likes its food) and, of course, ventilation and assuming they get all this right, they can only expect a harvest of up to 450 gm per m2, which, in terms of raw numbers, is fairly low for a modern strain with this kind of grow time.  The point about Ice Wreck, however, is that it’s about quality rather than quantity.  Growers will have to decide for themselves whether or not they feel the effort is worth it.