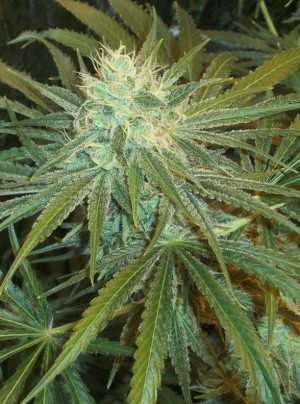 Sativa dominant Jilly Bean is an unusual strain, in that it was created by a woman, MzJill, in a world of cannabis breeders that is still very much male dominated. The strain is a cross between Orange Velvet and Space Queen and it appeared in the 2007 Top Ten Strains of the year in High Times Magazine.

The Jilly Bean strain has a fruity, skunky bouquet and its flavour combines sweet fruit and candy, as you’d expect from a weed whose name is a word play on jelly beans. The high is cerebral, euphoric and likely to put a smile on your face, making it a great daytime or party smoke. This weed’s inherent sweetness means it works well as a cake or biscuit ingredient. Medicinally, it can combat poor appetite and stress.

Its appearance owes most to its Indica genetics, since it grows short and bushy. Especially in cooler temperatures, the leaves take on a blue to purple hue as the plant matures. The light green buds are elongated and pointed with a sticky resin covering and orange to red hairs. THC content has been measured at as high as 17.2 percent.

For indoor growing, its short, bushy tendency makes it ideal for the SOG method, whether in soil or hydro. Flowering time is eight to 10 weeks and yields are in the medium range.

Jilly bean seeds can be grown outdoors as long as seedlings are transplanted after the last frosts have passed and reasonably warm weather carries on until the end of September.

The source of the Jilly Bean strain’s popularity is its sweet flavour and its uplifting high. Jilly Bean is quite easy to grow and so suitable for beginners as well as experienced horticulturists.