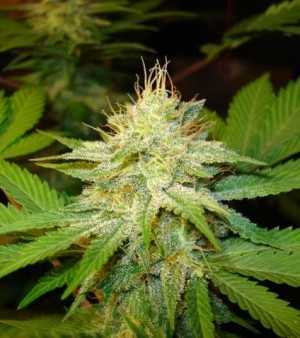 K-Train is an Indica dominant weed with two well-known strains as parents, OG Kush and Trainwreck. OG Kush is an Indica type with origins in the mountains of Hindu Kush while Trainwreck is a Sativa dominant strain created in California in the late 1960s. K-Train itself originates from California and the large medical cannabis scene that thrives there.

K-Train weed has an earthy, musky aroma while its taste includes notes of fresh berries, nuts and sweet spices. After a few tokes of K-Train, you’ll feel quite sedated with a cerebral high that is ideal for watching a movie or disappearing into a book. This is definitely not a weed to smoke if you plan on being physically active. Its sedative qualities mean that this strain is good for helping with stress and for insomnia.

K-Train plants grow to around medium height and have a bushy shape with lots of broad, fan-like leaves. The buds are thick and heavy and rather round. The plants grow with a medium-green colour and both leaves and buds have a coating of sticky resin. THC levels are in the medium range.

The K-Train strain is ideally adapted for growing with the SOG method and experience has shown that it does best in a hydro setup with a carefully controlled supply of nutrients. Flowering time is about nine weeks and you can expect to harvest up to 800 grams per square metre.

If you want to grow this weed outdoors, you’ll ideally live somewhere where the climate as at least as warm and sunny as the Mediterranean. In those conditions, the plant can do very well and produces up to one kilogram per plant. Harvest in the northern hemisphere is at the end of September.

K-Train may not be one of the best known strains, but it’s not too difficult to grow and it produces dependably abundant harvests. Experienced smokers who enjoy an Indica high balanced with some Sativa tendencies swear by this weed.