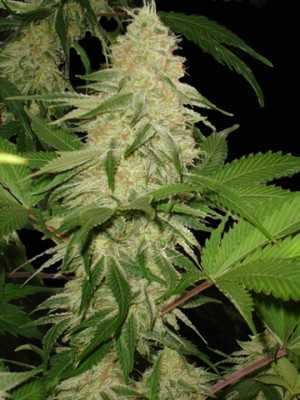 Kill Bill marijuana is a balanced Sativa and Indica hybrid. It was created by crossing two strains, Killer Queen and William’s Wonder, and obviously its name is derived from its two parents. Equally as obvious is that its name also conjures up Quentin Tarantino’s epic action movie.

Kill Bill weed has a skunky and musty aroma, while the flavor has distinct notes of pine forest combined with a surprisingly strong sweetness. The high comes on quickly as a euphoric, cerebral rush. This then settles into a more relaxing body stone which can continue for as long as three hours, although two hours is more common. Medical practitioners recommend this weed to patients suffering from stress, muscular pain or poor appetite.

Kill Bill plants are of medium height with broad, dark green leaves. The buds are dense and round in shape with a sticky coating of resin. THC content is in the medium range.

Indoors, the Kill Bill strain does well whether you cultivate it in a hydro or soil growing medium. Flowering time is from seven to nine weeks and yields are average.

Outdoors, Kill Bill can be grown in cooler regions as long as the summer has at least an average amount of warmth and sunshine. Harvest in the northern hemisphere comes in late September or early October.

If you’re looking for a weed that produces a well balanced stone, combining the best of Indica and Sativa, then you should definitely add Kill Bill marijuana to your shortlist.