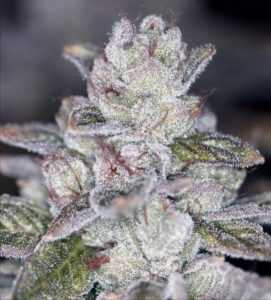 Indica-dominant Las Vegas Sour Bubba is a cross between Las Vegas Bubba Kush and Sour Jack. Even though this is a relatively new strain, it already has a fan following, due to its medical benefits and taste as well as the ease with which it can be grown.

Like Las Vegas itself, LVSB is a variety which mixes sweet and sour. The sweetness is fruity and full of citrus, the sourness that of a strong coffee or a good diesel strain. Sin City is known for creating the dankest of dank weeds and this one is definitely worthy of their name. It is also beautifully smooth.

Sin City has been coy about releasing details of LVSB’s THC content, but based on its parentage, we’d expect THC levels to be around 20%. Medically, LVSB is recommended for treating chronic pain, muscle spasms and (menstrual) cramps, along with anxiety, stress and insomnia. Recreational users can expect to feel that initial Sativa hit, like a big win in Las Vegas and then for the euphoria to settle into calm, relaxed pleasure. Overall, this strain is best kept for when you’re ready for some really excellent sleep.

This was released a limited edition strain in 2016, so there is only a very small number of lucky growers who’ve been able to get their hands on it so far, but feedback from them has been very positive. We’re hoping that the strain gets a full release in future.

Although Sin City has advised that LVSB is suitable for growing indoors and outdoors, it has only provided indoor growing times, which are in the region of 7 to 8 weeks. The feedback we’ve heard has only been from people growing indoors, but we would assume that the outdoor harvest would be around mid-September. User reviews back up Sin City’s statement that this is a nice, robust and stable variety, with decent yields in the region of 400 – 700 gr/m2.