Sativa-dominant Triple Cherry Diesel from Sin City is a cross between Buddha’s Triplets and Sour Jack, hence it has entirely different genetics to the similarly-named Cherry Diesel by MTG Seeds, which is a 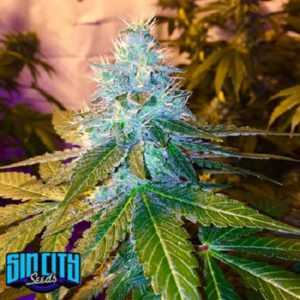 cross between Cherry OG and Turbo Diesel. Triple Cherry Diesel was released for testing in the spring of 2015 and quickly found favour with growers and users alike.

While there have been only a limited number of people lucky enough to get their hands on Triple Cherry Diesel seeds so far, feedback from growers has been excellent. There has been particular praise for the consistency with which a high percentage of the seeds germinate. The Buddha’s Sister genetics point to a strain which is easy to grow and produces very respectable yields and indeed this is the case. Triple Cherry Diesel grows indoors in around nine to ten weeks. We were unable to find official details on the outdoor harvest or locate any outdoor growers, however Triple Cherry Diesel is stated to be suitable for outdoor growing and we’d assume a harvest around end September. Yields are in the region of 400 – 800 gr/m2.