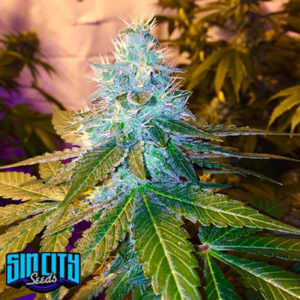 The flavour takes the berry sweetness of Blue Power and mixes in the herbiness of Sage and Sour OG. These top notes are rounded out by a rich, earthy body and, since this is a Sin City variety, the almost-obligatory diesel base. Sin City is probably already the go-to seed company for those who like their weed smooth and dank and Naked City Kush is a proud representative of its stable in that regard.

In spite of their fun-loving outlook and quirky names, Sin City is a company which has focussed very much on high-quality medical strains and Naked City Kush fits this model precisely. In other words, this is a variety for those who need serious relief from the likes of chronic pain, cramps and spasms, anxiety, stress and insomnia. Naked City Kush will provide a serious, old-fashioned, full-body stone and hence is definitely a strain for when you’re ready to sleep beautifully. It’s generally a challenge to get THC levels for Sin City strains, but based on the genetics, we’d expect in the region of 15% to 20%.

According to Sin City, Naked City Kush is suitable for growing both indoors and outdoors but it only gives indoor growing time and yield, which is eight to nine weeks and 400 – 750 gr/m2. Presumably the upper end of this scale is reserved for growers who give it the best attention. We would expect an outdoor harvest to be around the end of September. Overall, feedback from growers indicates that this is an easy strain to grow, but it does have quite a pungent and pervasive smell, so multiple carbon filters would probably be a good idea in terms of maintaining good relationships with your neighbours.