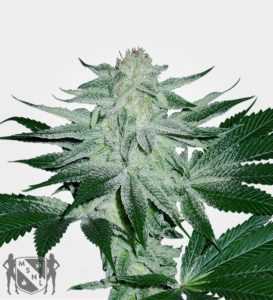 Also known as Matanuska Tundra and Alaska Thunder Fuck, the origins of this strain are lost in the mists of history, not to say mythology. It has become something of a legend amongst the cannabis community.

In the early days, Matanuska Thunder was basically any weed known or believed to have come out of Alaska, but the Reagan era was disaster for growers and those who kept going had to band together and look out for each other.  The result was that MTF began to be consolidated into a strain with recognizable characteristics.

Matanuska refers to a valley in Alaska and there are some who believe this strain is native to the area.  Interestingly, it is known for its covering of frosty trichomes, which the romantic might see as a homage to its snowy homeland.

You can expect the taste to have delicious chocolate and pine top notes, with a woody body and earthy base notes. And the aroma has plenty of menthol freshness about it. Even though Matanuska Thunder is a rather short indica dominant, its THC levels are high with levels between 19-22%. So you can expect a decent lift to your mood and a useful level of rapid pain relief.  After this, however, you transition into a mellow and relaxing stone, so this strain is probably best kept for the evening and could feasibly be used for insomnia.

Matanuska Thunder stays about as short as any marijuana variety can and still yields a decent 400 – 500 gr/m², which makes this more than ideal for indoor setups. Outdoor growers should note that although this strain is certainly hardy enough for outdoor growing, even in northern climates, it will still need a decent amount of sunlight and protection from any rain.

Matanuska Thunder, 5.0 out of 5 based on 2 ratings