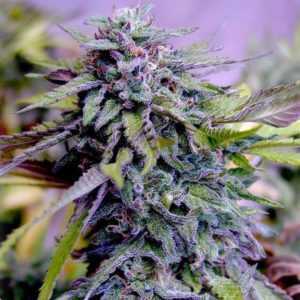 Original Grand Daddy Purp was created back in 2003 by Ken Este. It was initially just called Grand Daddy Purp but its huge success meant that many growers proceeded to create their own versions of it which some then sold under the name of Grand Daddy Purp without necessarily making it clear that it wasn’t actually connected with the original strain. Although an old saying has it that imitation is the sincerest form of flattery, Ken Este was left unimpressed and as a result, he rebranded his creation Original Grand Daddy Purp in an attempt to separate it from its imitators.

With 17% to 23% THC, Original Grand Daddy Purp has plenty of pain-relieving power and it is also quite capable of lifting you out of negative emotional states, it is, however, an Indica dominant, so after the initial energizing and upbeat head buzz, you’ll transition gently into a relaxing, cocooning body stone. Original Grand Daddy Purp is best used at night time, in fact it’s one of the most popular insomnia strains out there although it can also be used for pain, stress and depression.

In terms of taste, Original Grand Daddy Purps has absolutely nothing in common with Big Bud, it is Purple Urkle all the way, bursting with berries and grapes but with notes of crisp citrus and a solid, earthy base.  The scent is also packed with fruitiness but is also reassuringly solid.

With Big Bud genetics, you’d expect big yields and you’d be right.  Indoors, if you can allow Original Grand Daddy Purp 11 weeks of flowering you could collect up to 550g/m2, but if you’re in more of a hurry, you can harvest after just 8 weeks of flowering and you’ll still get a decent yield.  Outdoors Original Grand Daddy Purp will be ready around mid October and can yield up to 500g per plant.

Original Grand Daddy Purp will typically grow within a range of 75 cm (indoor minimum) and 2M (outdoor maximum).  It is very amenable to plant training.  This strain can be grown outdoors in warmer, drier climates and will also do well in a greenhouse or indoors.  It’s robust and undemanding and is an option for beginners if you either have the space to let it grow as it wants or are prepared to get hands-on with plant training.