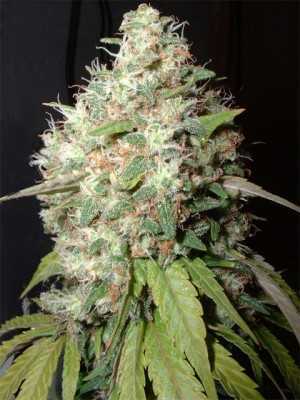 You can take your pick of two stories which circulate about the origins of The Doctor’s name. The first is that this is good medicinal marijuana, hence the name. The second is that this weed is named after champion Italian Motorcyclist Valentino Rossi whose nickname is The Doctor.

Whichever, if either is true, The Doctor is definitely an Indica dominant weed and it was created by crossing three strains, Great White Shark, South Indian and Super Skunk. Great White Shark won two prizes at the 1997 High Times Cannabis Cup while Super Skunk took prizes in 1990 and 1992.

The Doctor cannabis has quite a pungent aroma which is sweet and skunky and the flavour includes notes of fruit, black hash and eastern spices. The high is narcotic and sedating, so this weed is a great smoke for an evening in with a movie. Medical dispensaries recommend The Doctor for muscular pain, poor appetite and sleeplessness.

The Doctor seeds produce plants that grow to a medium height and are quite bushy, with dark green leaves. The plants produce large colas as they mature and the buds are rounded in shape. THC levels range from 15 to 18 percent.

The Doctor weed grows well with a SOG set up, although it’s a good idea to trim the lower stems because of the bushiness of the plant. Grown in soil the plants will produce a harvest with a sweeter flavor while those cultivated in hydro tend to have slightly larger yields. Flowering time is eight weeks and yields can be as high as 800 grams per square metre.

Grown outside, the plants may need support and they can produce yields of up to 1.2 kilograms per plant. This strain can thrive in cooler temperatures, with harvest time at the end of September in the northern hemisphere.

Reasons to choose The Doctor seeds include exceptionally high yields, ease of growth and a potent Indica high. Also, this weed can be successfully grown by newcomers to the cannabis cultivation scene.