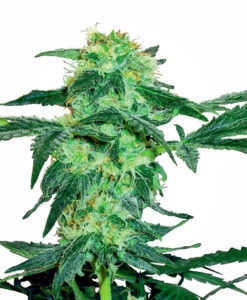 White Ice is yet another wonderful strain to be bred from classic Northern Lights.  It’s attractive to look at and enjoyable to smoke making it a good choice for medical users who want to grow their own prescription at home.

The flavour is what you’d expect from a European skunk strain.  It has sweetness to counterbalance the pungent oiliness.  The smoke is strong and full-bodied without being harsh.  It’s unlikely to trigger coughing fits even if smoked as a joint and if put in a vaporizer will glide down even more easily.

In terms of effect, this is a very distinctive strain.  There is a definite high, but it’s more of a relaxed body high than a head high.  Even though this is a very potent strain and a little goes a long way, the THC level is never going to send you shooting up into the atmosphere.  Instead, you’ll feel happy and calm, maybe a touch introspective, but with minimal to no couch lock.  White Ice has made a name for itself as an excellent “unwind and chill out strain” and hence tends to be used for conditions such as anxiety, stress, depression, fatigue and, of course, insomnia, from which you will probably already have gathered that this is very much a night-time strain.

As well as doing you good, White Ice is a strain which really looks good, in fact, it could even pass as an ornamental plant, particularly later in the growth cycle when it’s covered in the sparkling white trichomes which give it its name and demonstrate its worthy lineage.  Putting this together with its classic Indica shape means that many people have suggested that it looks like a little Christmas tree.  Those crystals are also a good indicator of one of the reasons why this strain is popular with growers.  There are plenty of buds and they are super-dense, which means that you can reasonably expect a decent harvest even from smaller plants.

Even though White Ice looks like it is covered in snow, this is actually a strain which is quite greedy for light, which means that realistically only people living in Mediterranean climates have a decent chance of growing it outside.  On the plus side, however, in addition to being very compact, White Ice is actually pretty unfussy in general terms, so as long as you pay attention to the basics of water, nutrients and ventilation, you should be fine as far as the plant is concerned.  If you want to keep on good terms with your neighbours, we’d suggest you also pay attention to odour control.