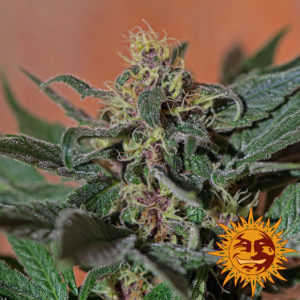 The story behind the creation of Ayahuasca Purple is that Derry, founder of Barney’s farm, met up with an Alaskan grower who was on holiday in Amsterdam.  The tourist gave Derry some Red River Delta seeds and Derry had the genius idea of crossing them with Master Kush to create Ayahuasca Purple.

Even though this strain is actually very much Indica dominant, it has a very impressive 21%THC, which is the sort of figure you’d usually expect from a Sativa.  This makes it a great choice for people who want maximum pain relief and mood relief in minimum grow space.  The point to remember, however, is that Ayahuasca Purple is still very much an Indica at heart, meaning there is quite a bit of CBD in it as well (1% to 2%), so it’s probably best kept for night-time use.  At the very least, allow yourself time to recover from the deeply relaxing stone which follows the bright and psychedelic high.

We’ve no idea how the flavour of Ayahuasca Purple compares to the actual Ayahuasca drink used in the Amazon to attain spiritual enlightenment, but we can tell you that it is filled with tropical fruit, especially papaya, along with a touch of lavender and a hint of nuttiness, particularly hazelnuts.  The aroma is mostly fruit and nuts, with less of the lavender, and there is also a touch of citrus.

Ayahuasca Purple will grow happily indoors or outdoors.  Indoors it may stay as short as a metre in height while outdoors it may grow up to about 1.5M but is unlikely to grow much taller.  Part of the reason for this is that it finishes flowering in a super-speedy 7 weeks indoors and by the end of September outdoors.  This makes it a great candidate for growers in cooler climates, who can’t afford to hang around when it comes to collecting their harvest.  Speaking of which, indoor growers can expect up to 650g/m2 and outdoor growers at least as much per plant.

Even though it’s the medical benefits which really matter, we have to say Ayahuasca Purple is a gloriously pretty strain which glossy green leaves, purple flowers and orange hairs.  On a more practical note, Ayahuasca Purple is based on two strains which were developed to grow in moderately tough conditions so the only reason it’s been given a “medium” rating is because it’s a photoperiod strain, overall it’s a very straightforward and beginner-friendly grow.