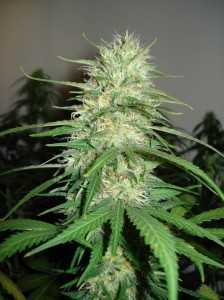 Another production from legendary Dutch grower KC Brains, Brains Escape weed is a combination of a rare strain from Switzerland, Edelweiss and an exotic strain from Brazil that includes genetics from Ecuador. Although it has strong Sativa characteristics, it is in fact close to 50/50 Sativa and Indica.

Brains Escape weed has a slightly skunky smell, offset by the aroma of lemon peel, while the flavour has citrus notes as well as a hint of hash. The high builds over 15 to 20 minutes and it stimulates rather than overwhelms, making this a good daytime smoke. Dispensaries prescribe this strain for poor appetite and mild pain.

Outdoors, the Brains Escape strain can really stretch out, exceeding two metres, while indoor growing produces plants of up to 1.5 metres. The leaves are wide, dark green and long-fingered, while the buds are spear-shaped and covered in orange hairs. The THC level varies from 18 to 20 percent.

Brains Escape weed will thrive indoors in soil or hydro, although the flavour is improved by soil growing. Flowering time is eight to 10 weeks and yields are around 160 grams per plant. Outdoors, the plants are quite hardy and can go as tall as three metres. Harvest comes in late September and you can expect around 800 grams per plant.

The Brains Escape strain is easy to grow and with the right care and attention can be cultivated outdoors in cooler countries. The high is pleasantly relaxing while allowing active pursuits and socialising, so it’s a good choice if you prefer not to end up prostrated in front of the TV.