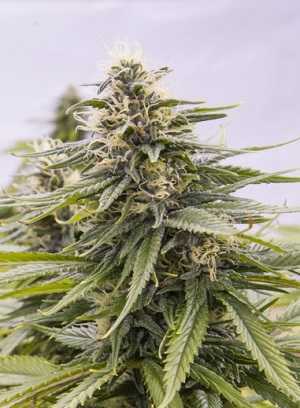 Developed by the ever-creative grower KC Brains in the Netherlands, Brains Choice weed is a genetic marriage of three strains, Lambsbread (from Jamaica), Leda Uno and White Widow. The first two are not so well-known, but White Widow is a popular strain which proved its pedigree by winning the High Times Cannabis Cup in 1995. This weed is 70 percent Indica and 30 percent Sativa.

The aroma mixes spice and sandalwood, and the flavour is smooth with floral notes with a touch of fresh herbs. The stone comes on quickly and is very strong; all but the most hardened of smokers can expect a period of couchlock. Medical practitioners recommend it to stimulate appetite and to encourage sleep for those who suffer from insomnia.

The plants of the Brains Choice strain can grow tall, up to two metres outdoors, although indoor growers can limit the height to a metre with cautious pruning. The leaves are mid-green and groups of rounded buds covered in frosty crystals form along its branches. THC levels are around the 20 percent mark.

With indoor growing, Brains Choice does well in a hydro or soil medium. Because of its tendency to shoot up, indoor growers need to train it carefully. Flowering time is eight to 10 weeks and yields vary from 150 to 200 grams per square metre. Outdoors, the plant favours plenty of warm sunshine and may need staking as it grows. Outdoor harvest comes at the end of September and each plant can produce up to 900 grams.

Brains Choice weed is recommended for growers who have some experience under their belts, rather than novices. Those who do choose it can expect to produce some exceptionally strong weed.