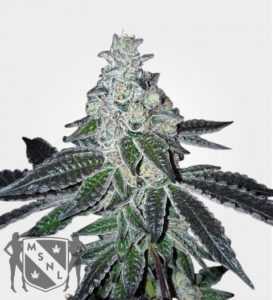 The footprint that Girl Scout Cookies has left on the world of commercially available marijuana is quite hard to understate. Shooting its way into countless ‘top 5’ lists and subsequently being used as the basis for a multitude of highly successful new strains, Girl Scout Cookies has become a pillar of today’s cannabis scene.

One such result of this is the strain we have before us today – Gelato (also sometimes called ‘Larry Bird’). This rising star is the result of Thin Mint Girl Scout Cookies being crossed with Sunset Sherbet (itself a strain with a Girl Scout Cookies parent), making this a clear descendent of the modern legend itself. Far more than a simple altered clone of its illustrious parent, Gelato both lives up to the expectations placed on it from its genetic stock and also brings something new and special to the market. Named after its irresistibly sweet aroma and taste, Gelato stands as a proud member of the new generation of marijuana strains.

Among the many things that Gelato offers in abundance, its brute strength is perhaps the feature that holds the most appeal. With a THC level that typically ranges between 18-25%, Gelato will have even the most hardened veteran smoker watching their toke-count.  Yet this is not an immobilising coma-in-a-joint kind of strain, but rather offers a very uplifting and energetic high. The effects hit you swiftly after smoking, spreading calm and relaxation to body and mind alike. This allows you to stay more in control and direct your THC-laden faculties towards something active, productive or creative, the latter of which Gelato is especially good at assisting with.

Despite these qualities, however, Gelato is not a sativa dominant strain and is actually quite well-balanced. Its genetics give it a slight indica dominance of 55% with the sativa component making up the remaining 45%.  Gelato is commonly purported to be the best tasting strain in the world, with its delectable nugs filled with berry-like ice cream flavours that are sweet and slightly citrusy. The smell has all this richness and allure too, doing justice to its Italian namesake with ease.

Unfortunately, coaxing the Gelato plant to its full potential is no easy task and the strain remains one of the more difficult to cultivate. Its demanding nature means it is best kept in a grow tent indoors, allowing you to control the temperature and cater to it more carefully. The plant does have some positives, however, sporting a strong resistance to diseases, a quick 56-63 day flowering time, and growing to a short-medium height.  An outdoor attempt will need to be somewhere with a warm and humid climate to have a chance of growing Gelato successfully. Those that manage this, however, can expect their harvest to come in early to mid October.

Providing Gelato with what it demands will see you rewarded with 500-600g per m2 in optimal conditions. Novice growers may want to start on an easier strain before expecting Gelato to provide this so easily, however.