There’s niche, there’s rare and then there’s Komodo from Avitas for which there is practically nothing in the way of breeder information or user info. About all 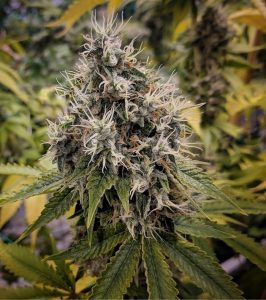 that is known is that it is a cross between a Dragon OG female and a Kimbo Kush male and is not to be confused with the similarly-named Chemodo Dragon, which is from a completely different breeder and has very different genetics.

According to internet sources and effect, Komodo has about 19% to 22% THC. This is much lower than Chemodo Dragon, which is one important reason why it’s important to be clear which strain is which. Komodo is a 50:50 balanced hybrid which means that the energetic and euphoric head rush you expect from a quality Sativa, is balanced by the mellow chillness typical of Indicas. Similarly, the deep full-body stone you’d expect from a quality Indica is lightened up by the Sativa genetics, which means it’s more in the line of a very pleasant snooze than a couch-lockingly deep slumber. All in all, therefore, Komodo is a nicely flexible strain which can be used either day or night, as always, make sure to allow yourself plenty of recovery time if using it during the day.

Although there is no official growing information about Komodo, based on its genetics, we would expect an indoor flowering time of 8 to 9 weeks and for plants to reach a height of about 1.5M to 1.8M and to deliver a yield of up to 500g/M2. Outdoors, we would expect a harvest period of early to mid October and for plants to grow to height of around 2M and to deliver a harvest of up to 600g per plant. As both parent strains had a definite preference for warm, dry, sunny climates, we would expect Komodo to be the same in this regard and we would also expect it to have inherited its parents’ robustness.

The flavour and aroma of Komodo can probably be best described as “spiced lemon”. The spice part reflects its Kush heritage, which can be clearly detected in a body which is a combination of earth, wood and, of course, hash. The lemon part reflects the fact that this strain has no less than 3.6% terpenes of which the majority is myrcene, followed by limonene and caryophyllene. The odour is fairly strong so be considerate and/or consider vaping as an alternative option.