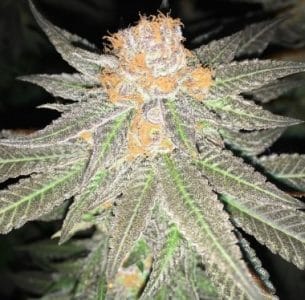 Nothing to do with moon rocks, the 60% Indica strain Moon Drops is a cross between Purple Urkle and Do-Si-Dos, the latter of which may not be particularly well known but is yet another descendant of the ever-popular OG Kush through both its parents (Girl Scout Cookies and Face Off OG).

Even though it’s an Indica dominant (albeit only just), Moon Drops has around 20% to 22% THC and moderate CBD.  This means that although the pain relief is at the sort of level you’d expect from the headline THC figures, the high is a bit more mellow than it would be if the strain were pure Sativa, think happy and upbeat rather than euphoric and bursting with energy.  Likewise, the body stone is quite a bit lighter than you’d expect from a pure Indica, although it’s still very relaxing and you’re still going to need to be sure to leave yourself plenty of recovery time before doing anything complicated, such as driving.

In principle Moon Drops can be grown both indoors and outdoors, but in practice the mid-October harvest means that Moon Drops is only likely to be really happy outdoors towards the southern end of Europe.  Indoors it will need 10 weeks of flowering, which is a bit longer than average for an Indica dominant, but very reasonable for a strain with such a high percentage of Sativa genetics.  Similarly, while its height range of about 1M (indoor minimum) to about 1.8M (outdoor maximum) is also on the taller side for an Indica dominant, it’s still much more compact than many strains with a lot of Sativa genetics.  Yields are also very reasonable at up to 550g/m2 indoors and 300g per plant outdoors.

We do have to mention here, that Moon Drops is one really pretty strain with a thick layer of glorious, frosty trichomes covering buds which have flashes of purple within the green.  For all its pretty looks, it isn’t a particular demanding strain, although it does expect you to know your basics, hence the fact that we’ve classed it as moderately difficult to grow.

If you had to sum up the flavour of Moon Drops in one word, that word would be “grapes” as this is clearly the predominant flavour, but there are other berries in there as well, especially blueberry along with a base of sweet earth and musk almost like a very light skunk.  There’s a definite skunkiness to the aroma, although the predominant notes are still of grapes and berries and the scent is definitely more sweet than sour.