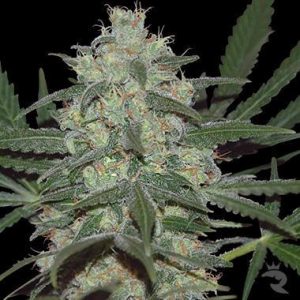 You can’t get much more old-school than Pakistan Valley, a landrace Indica from the valleys of Pakistan, near the border with Afghanistan, the home of Kush.  Even though this is undoubtedly a heritage strain, it has plenty to offer the modern world.

With about 21% THC, Pakistan Valley has what it takes to provide fast-acting relief to physical pain or negative emotional states.  The high, however, is much more restrained than the headline figure might suggest, since this is a pure Indica.  It’s all about blissful, zen-like joy, rather than rushing euphoria.  As you might expect from its background Pakistan Valley is also high in CBD, so after the head high gently ebbs, you will transition into what is literally a classic Indica stone.  This is, therefore, best kept for night-time use.

Pakistan Valley will grow indoors or outdoors and, as you’d expect from a landrace strain, is pretty robust and unfussy.  The main reason we’ve classed it as being moderately difficult to grow is because it is a photoperiod strain.  On that note, indoors Pakistan Valley tends to stay very short and bushy, rarely growing higher than a metre.  That means you are going to have to trust to your calendar when it comes to flipping the lights over to flowering.  Give it about a month before you do.  Outdoors, this strain can grow much taller, up to about 2.5M, so keep that in mind when choosing a growing space.  Also, remember that there is a difference between “landrace” and “weatherproof”, either find a warm, dry, sunny growing location outdoors or keep your plants under cover, be that fully indoors or in a greenhouse.  On the plus side, Pakistan Valley has good resistance to mould, diseases and pests and can usually tolerate a bit of rough handling from beginners on a learning curve.

One of the interesting points about Pakistan Valley is that although it only has a six to eight week flowering time, its outdoor harvest period is mid October, which could be a little on the late side for growers towards northern Europe and beyond.  Indoors, you can expect up to 400g/m2 and outdoors you can collect up to 600g per plant.  Save the trimmings from your harvest, they’re great for cannabis extracts such as hash.

As you would probably have expected, Pakistan Valley has the taste and aroma of old-school Kush, so full of earthiness, hash spices and pine, although possibly a bit sweeter than you might have expected.