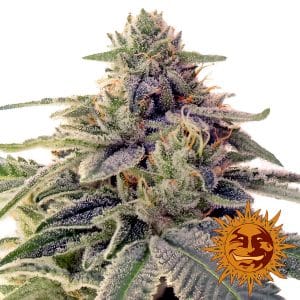 Shiskaberry from Barney’s Farm is a cross between Blueberry and Afghan. It has won many fans for its ability to deliver substantial yields, even though it is both compact and quick-growing.

We know that Blueberry generally has about 19% to 24% THC, while Afghan generally has about 17% THC.  We’d therefore expect Shiskaberry to have about 20% THC, which tallies with its effects.  The initial head buzz has all the typical characteristics of Indica genetics. It makes you feel happy, relaxed and may make you talkative.  It will also act quickly to relieve the pain of many medical conditions.  As the initial effect of the THC gives way to the longer-term effect of the CBD, you’ll find yourself gently transported into the classic, old-school Indica stone. Which offers the ultimate relaxation for body and spirit.  All of this means that Shiskaberry is really best suited to use at night time. If you do use it in the day time, leave yourself time to come down.

Shiskaberry is equally at home indoors or outdoors in a warm, dry, sunny climate.  Greenhouse growing is also possible and may be an economical option for growers towards the north of Europe.  Indoors, it will require 7 to 8 weeks of flowering and will typically yield in the region of 500g/m2 to 600g/m2.  Outdoors it will be ready in the latter part of September and will yield in the region of 1.5Kg per plant and 2Kg per plant.  This is particularly impressive given that Shiskaberry has a growing range of between 80cm (indoor minimum) and 1.2M (outdoor maximum).

In general, Shiskaberry is a very easy strain to grow. However, Barney’s Farm has advised that it has a slight vulnerability to mould.  We’d therefore like to highlight that it is vitally important to allow your plants enough space to grow outwards, as well as upwards. This will ensure that the air can flow freely around your growing space.  You are also strongly recommended to check your plants at least once a day for signs of anything unusual, so that you have the best possible chance of identifying problems (like mould) in their early stages . Good air flow will also help with odour control. Air filters are definitely a good investment when growing Shiskaberry, as it develops a very powerful odour during the latter part of flowering.  We’d say that complete beginners would be best starting with another strain first. However, if you have set your heart on this one, just give it a try!

When you do collect your bud, you’ll discover that it’s taste comes predominantly from the Afghan side. Earthy and full of hash spices, but there is also a fresh, berry sweetness to it.  The aroma is a roughly equal blend of hash pungency and berry fruitiness.