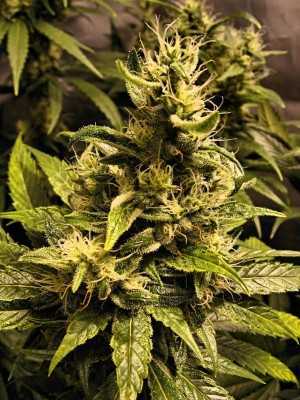 Chiesel, first available to the growing and smoking public in 2008, is a 60 percent Sativa, 40 percent Indica hybrid. It’s the result of combining the Cheese and NYC Diesel strains, hence the name. Both strains have been multiple past winners in the annual High Times Cannabis Cup. Cheese has the further distinction of being one of the few strains created in the UK.

The Chiesel strain exudes a pungent aroma as it grows, which is a mixture of the classic skunk smell and the slightly sour smell that Diesel type strains are known for. When smoked, the weed has citrus flavours reminiscent of grapefruit. The high is energising – it’s a great smoke before, or during, a party, or if you’ve got things to do and places to go. In medical use, the Chiesel strain can help with stress, low energy levels and poor appetite.

Chiesel seeds produce plants that grow to about 1.5 metres indoors, with dark green leaves that have thin, pointed fingers. The sticky, dense buds are a medium green with orange to red hairs and a visible covering of silvery crystals. THC content is 18 percent.

Chiesel is a vigorous grower indoors and it appreciates a generous nutrient regime in both soil and hydro. Flowering time is nine to 10 weeks and yields are in the medium range.

You’ll get the best harvest with indoor growing, but outdoor cultivation is possible if you live somewhere with warm, sunny summers.

If you’re looking for a strain that thrives in an indoor growing set-up and produces a potent and energising smoke, you won’t go far wrong with Chiesel.