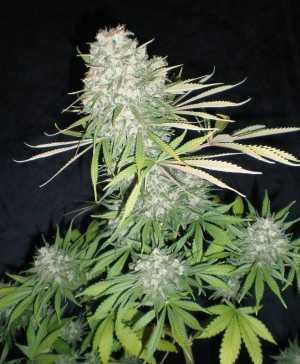 Smoking NYC Diesel will give you a highly cerebral and longlasting buzz with minimal couchlock tendencies. This weed has a sharpish citrus taste and smell, with tones reminiscent of grapefruit and lemon. Its Diesel parentage adds a pungent, earthy flavour and aroma. It’s good for pain relief and appetite stimulation.

The plant grows in a fir tree shape with large, broad mid-green leaves and pointed buds with orange to brown hairs and a coating of resin. Indoors, the plants grow between 1.5 and two metres high with pruning, although given a free hand outdoors they can reach four metres.

Grow them indoors in soil or hydro mediums and trim the plants back to encourage extra flowering and budding. Flowering time is quite long, varying from nine to 12 weeks, and yields are around 400 grams per square metre.

Outdoors, NYC Diesel seeds need plenty of hot sunshine. This will make them grow tall, and the plants may well need support as they mature.

NYC Diesel is highly popular among the cannabis cognoscenti in Europe as well as in the USA, so it’s no surprise that it’s won so many awards. It’s not the easiest to grow but it gets high marks for its distinctive flavor and energetic high. This NYC Diesel review highly recommends it!