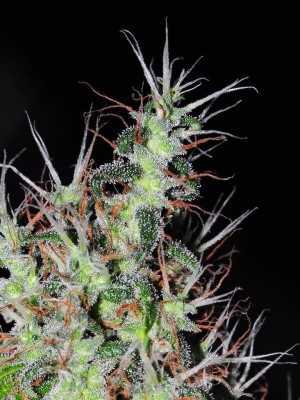 Kali Mist, a 90 percent Sativa strain, first appeared on the market in the Netherlands in 1994. Its main genetic heritage comes from South East Asian Sativa strains, although its creators have never revealed the exact lineage. The weed is named for Kali, a Hindu goddess.

It’s been a firm favorite on the Amsterdam coffee shop scene since its introduction and it’s also taken a series of awards in the High Times Cannabis Cup. In 1999, it took first place in the Hydro section, in 2000 it came first in the Sativa section, and in 2002 it was third in both the overall Cup and the Sativa section.

This weed has a clean taste and aroma packed with sweet, spicy notes. The hit is cerebral and energetic – just the smoke you want if you’re heading out for a night with friends. It’s also good as a daytime smoke since it’s stimulating rather than hypnotic. Medicinally, Kali Mist is particularly recommended for alleviating menstrual pains.

Indoors, plants will grow to about 1.5 metres when pruned, but outdoors they can reach a height of three metres. It has a branching rather than a bushy growing habit and tends to have few leaves but lots of buds which are long and fluffy. THC content is in the 14 to 16 percent range.

If you grow this plant indoors you should trim it to keep it within bounds. It does well in a SCROG set up with its branches carefully trained. Flowering time is long, as much as 12 weeks, and you can expect to harvest up to 500 grams per square metre.

Outdoors, its long flowering time means that harvest doesn’t come until mid to late November. That means that you need to live somewhere with long sunny summers – if your area is at risk of autumn frosts, Kali Mist seeds are not a good idea for outdoor cultivation.

If you’re a fan of the cerebral hit that Sativa type weeds offer, this Kali Mist review seriously recommends you consider this strain. Its long flowering period and prolific growth mean Kali Mist is not the easiest weed to cultivate, but the results more than make up for that.