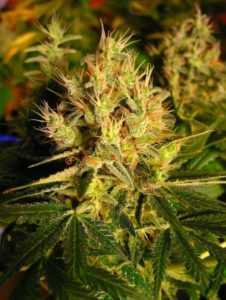 Kali Mist by Sagamartha Seeds, is an award-winning strain, but it picked up its awards in 1995 and 2000, when the competition was far less intense than it is now.  These days, it’s still a decent strain, but realistically, its award-winning days are long gone and highly unlikely to return.

Having said that, Kali Mist does still have a dedicated band of followers and we suspect that this is largely (if not completely) due to its taste.  It has an earth and woody base with citrus top notes.  Interestingly, the smell is actually warm and spicy, not really what you’d expect given the taste.

The genetics of Kali Mist have long since been lost in the mists of time, although it’s clearly a Sativa dominant (very much so), but its THC levels have been measured at about 15% and it has low CBD.  This is enough to provide decent pain relief and to help with conditions such as anxiety.  In fact, the medical benefits of Kali Mist may actually be another important reason why this strain has stayed popular enough to be easily found at many seed retailers.  The first key benefit is that Kali Mist has the reputation of delivering a very clean, crisp and creative high, which energizes both mind and body.  The second is that Kali Mist is particularly highly regarded as a treatment for menstrual issues.  Given the current state of (lack of) research into medical marijuana, it’s impossible to say if this latter point is based on fact or just the placebo effect of being told something will do you good, but it probably encourages at least some women to give this strain a try and if it works for them, it’s entirely understandable that they would stick with it.

While Kali Mist does actually have quite a few good points, the downside, and it’s a big one, is that it is a whole lot of hassle to grow, which basically puts it into the category of old-school Sativas, which are basically being pushed out of the way by more modern Indicas, particularly autoflowering ones.  Back in the mid-1990s, 15% THC was enough to leave judges and users very impressed and to be considered more than worth the lengthy grow time and extensive care and maintenance Kali Mist requires.  These days, however, there are autoflowering strains with that kind of THC level and many of them offer bigger yields than the 300gr/m2 you can get from Kali Mist in close to half the growing time.