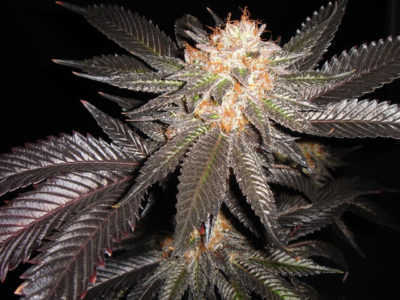 The exact origins of Hawaiian Punch are unknown but since it’s thought to be a landrace Sativa, which was subsequently stabilized by Sagamartha Seeds, there’s a distinct possibility that it long predates the 1934 invention of its namesake, the fruit juice drink.

Fruit certainly features in the taste of the Hawaiian Punch weed strain, in particular there are notes of melon and pineapple to bring plenty of fruity sweetness, which is nicely counterbalanced by citrus elements and a cleansing edge of menthol freshness.  There’s nothing in the way of earthiness, woodiness or skunk to ground Hawaiian Punch, which may or may not be a positive depending on your particular tastes.  Interestingly, the aroma is actually quite spicy.

The “Punch” in Hawaiian Punch has a double meaning.  In addition to having the flavour of a high-quality fruit punch, this strain is quite capable of delivering a knockout punch to the user, quite literally unless you are prepared for it.  In terms of effects, Hawaiian Punch can be quite interesting.  The THC level is generally quoted as being 20%, but that is an average value.  In the real world, the THC level can vary from the fairly moderate 15% to the fairly high 25%, which means that you could find yourself getting noticeably more or noticeably less than you’d expected.  The other issue is that Hawaiian Punch can either get to work straight away or need a bit of time to get going, this variation is probably directly correlated to the variable THC level.  Again, you can’t necessarily predict the effect as accurately as you might like.  What you should get is a feeling of energy, clarity and focus, which can either help with creative tasks or make boring ones more acceptable.  What you may get is either a gentle mood lift or a real, psychedelic trip depending on how much THC is actually in the nugs you are smoking.

In fairness to Hawaiian Punch, as classic Sativas go it’s actually pretty undemanding.  That’s probably down to the landrace genetics.  At heart, Hawaiian Punch is a strain which is used to fending for itself.  The downside to this is that it’s also a strain which is used to having as much space as it wants to grow and not having to worry about producing high yields to suit humans.  In other words, for all this strain likes to stretch, it will only be likely to produce about 350gr/m2, which can be easily beaten by numerous modern autoflowering strains.