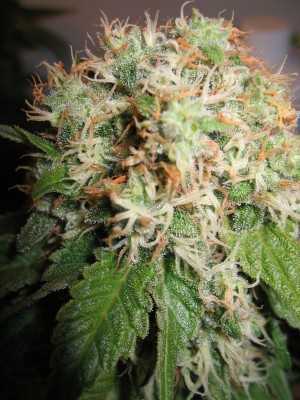 The Sativa dominant Pineapple Punch strain was created by breeders in the Netherlands, and is a popular weed on both sides of the Atlantic. It’s a cross between two strains, the Real McCoy and Skunk #1, the latter being the basis for so many modern cannabis types. This strain’s name is explained by its marked flavor of exotic fruits

Pineapple Punch weed has a rich, skunky aroma mixed with notes of sweet tropical fruit, and the flavor is much the same. Smoking this weed will quickly put you in a cheerful and upbeat mood, sending you into fits of uncontrollable laughter at the slightest of things. Medical cannabis users turn to this strain for relief from stress and to increase diminished appetite.

Pineapple Punch seeds produce plants that grow to around 130 centimetres tall and have broad, lime-green leaves. The buds are fluffy rather than dense and covered in a dusting of silvery crystals. They also display a coating of pink and orange hairs. THC level has been measured at 10.5 percent.

Grown indoors, the Pineapple Punch strain produces its best flavour when cultivated in organic soil, although it will also thrive in hydro. Experienced gardeners remove the lower branches to improve air circulation and light penetration. Flowering time is nine to 10 weeks and yields are in the average range.

You can grow Pineapple Punch outdoors but only in a warm sunny climate, at least equivalent to the Mediterranean. Harvest in the northern hemisphere comes in late October.

Connoisseurs rate the Pineapple Punch strain highly for its energetic, cerebral hit and its tropical fruit flavours. It does require some close attention when growing, so it’s not the best choice for novice growers.