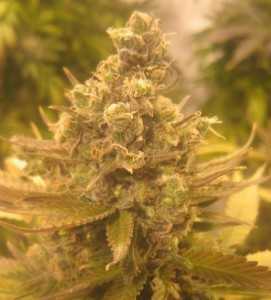 Sativa dominant Sleestack is named after the alien race, the “Sleestaks”, green humanoids with scaly skin who appeared in the cult 1970s children’s TV series, ‘Land of the Lost’. Why the weed strain has gained a ‘c’ not present in the alien name is presumably due to poor spelling skills somewhere along the line.

Sleestack is a cross between the Shrom and Martian Mean Green strains, the latter a prize winner in the 2005 and 2006 High Times Cannabis Cup competitions.

The Sleestack strain has a musky odour and the flavor has elements of skunk and spice, with a slightly sour undertone. When you smoke it, you’ll first notice a strong physical effect but as the high settles down you’ll also feel mental stimulation and a stoned energy. Medically, this weed can help with stress and pain relief.

This plant grows to a height of 100 to 120 centimetres indoors and up to two metres outdoors. The leaves have long serrated fingers and the dark green buds display a heavy coating of silvery crystals. THC content is in the high range at 20 percent.

Sleestack seeds thrive indoors, although it doesn’t like extreme heat. Apart from that, this strain is not too fussy and exhibits good resistance to mould and mildew. Flowering time is around nine weeks and yields are at the medium level.

Sleestack is easy to grow and so a good choice for the beginner. It’s also a potent weed, producing a stone that’s balanced between physical and mental effects.