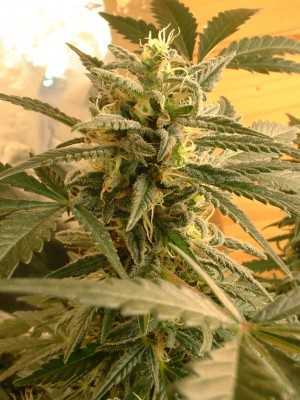 The origins of Trainwreck weed are lost in the mists of time, although the best bet seems to be that it was first grown in Northern California in the late 1960s. In any case, this is a Sativa dominant weed strain that has built a reputation for an excellent euphoric high.

The name too is shrouded in mystery. One tale has it that it was being grown for the first time on a site near a railway line where there was a crash. A competing theory simply puts the name down to the powerful effect that this strain can have when grown with skill and care.

The versatile Trainwreck strain grows both indoors and outdoors. The plants grow tall and sturdy with a thick stem, needing attention to keep them in bounds. Grown indoors in controlled conditions, Trainwreck can attain a height of 150 centimetres and THC levels are reported as high as 20 percent.

Indoors, Trainwreck seeds will produce mature plants ready for harvest in about 10 weeks. Outdoors, the plant needs a slightly longer growing period. Plant it in well-rotted compost as soon as the last threat of frost has passed and harvest in autumn when the tight, sticky buds have reached their full potency. In the right conditions it reliably produces up to 500 grams per square metre and around 700 grams per outdoor-grown plant.

Trainwreck is a strong weed strain that produces a clear and active, euphoric cerebral high. The smell has a strong resinous hint, sometimes described as earthy, with citrus undertones and the taste is similar with an extra skunky edge. Medicinally, the weed is said to combat pain and stress, and to increase appetite.

Because it can take a longish time to mature outdoors, Trainwreck weed is most strongly recommended for the indoor grower. However you grow, the plant produces a profusion of resin-covered buds which smoke well and are a popular choice with medicinal users.