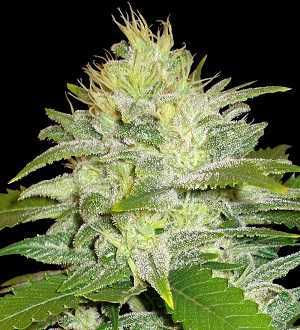 Created in the Netherlands, the White berry strain first went on sale in 2007. It’s original cultivators have never revealed exactly which strains were combined to give birth to White berry, but we do know that it’s a 75 percent Indica, 25 percent Sativa mix. High Times magazine named this strain one of the top 10 of 2008.

The White Berry strain’s bouquet combines berry notes with a hint of lemon citrus and the taste is quite sweet with spicy undertones. The high is typically Indica, a heavy body stone with some couchlock tendencies, although, you can detect a Sativa influence as well when smaller quantities are smoked. Medical practitioners recommend White Berry for help with lack of appetite and insomnia.

The plant grows to between 90 and 100 centimetres in height and has a high bud to leaf ratio. Leaves start out a fresh, mid-green but some, especially those near the top of the plant, take on a purple or reddish colour during the later stages of the growing period. The buds are dense and increasingly covered in white crystals as they mature. THC content is a powerful 18 percent.

Grown indoors, White Berry weed thrives with a SOG set-up whether it’s cultivated in hydro or soil. The flowering phase is quite short at seven weeks and you can expect yields of between 400 and 450 grams per square metre.

White Berry seeds can also be grown outdoors as long as it gets enough sunshine. Outdoor harvest comes in early October in the northern hemisphere.

This weed is quite easy to grow and even beginners should see a good crop of high potency. Experienced growers will find the White Berry strain a breeze to cultivate and connoisseurs will enjoy the subtle berry taste.