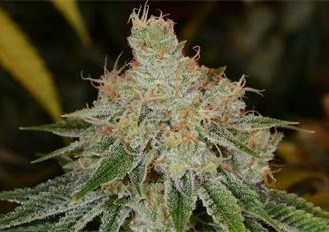 Contrary to common (and understandable) internet rumour, The White has no known connection with White Widow, Northern Lights or any such strains.  While it’s origins are something of a mystery, it is definitely a member of the Kush family and the common theory is that it is a cross of Purple Kush, Master Kush, and OG Kush.

Even though The White is clearly an Indica dominant (believed to be about 85% Indica), it has between 18% and 29% THC (depending on how long it is allowed to mature), hence the name.  While the upper end of this range is clearly very strong, it’s worth remembering that the prevalence of Indica genetics means that the overall experience is rather different to what you might expect from a Sativa with similar levels of THC.  While it’s certainly positive, upbeat and creative, it’s less energetic and more mellow.  The pain-relief, however, stays the same.  Interestingly, for all its Indica genetics, The White only has 0.15% to 0.25% CBD, which is enough for a very warm, comfortable and relaxing full-body stone but not enough to leave you spending hours in couch-locked oblivion.

The White has a growing range of 0.9M (indoor minimum) to about 1.6M (outdoor maximum).  Indoors it will need 7 to 9 weeks of flowering and outdoors it will be ready towards the end of September or start of October.  Basically the longer you leave it, the higher the THC content will be.  A typical indoor yield would be in the region of 450g/m2 and a typical outdoor yield would be in the region of 600g per plant.  We’ve classed The White as being moderately difficult to grow mainly because it is a photoperiod strain and partly because there is very little in the way of strain-specific guidance available for it.  Having said that, at the end of the day, it’s a Kush, which means it comes from a family of plants which are known for their robust and undemanding nature and their general resilience to mould, diseases and pests.  Therefore, as long as you’re comfortable managing light cycles and are scrupulous about following the principles of good ventilation and odour control, you’ll probably find it hard to go too far wrong with The White.

In terms of flavour, The White can probably be best described as “generic Kush”.  There is a base of wood and top notes of fruity sweetness and pine.  This is reflected in the fragrance, which is also somewhat pungent and “skunky”.