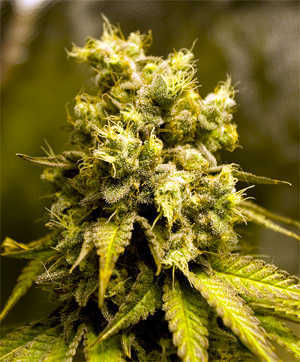 Hollands Hope is an old favorite, especially among growers in cooler climes. It was specially created to produce successful harvest in the Netherlands, where summers are not always dependably warm and sunny. The plant is an Indica and Sativa hybrid, with Indica dominance, and was created in the early 1980s by crossing an old-school skunk with and an Afghani strain.

Hollands Hope gives a pleasantly clear high that leaves you feeling energetic and ready to go, making it a perfect daytime smoke. The smooth flavour has earthy tones with hints of citrus fruit and the smell is slightly sweet and skunky. Used medicinally, this weed is good for alleviating stress and increasing appetite.

The plant grows tall, as high as two metres, and as it approaches maturity the leaves and buds take on an increasingly purple colour. Despite its height, it maintains a compact growth pattern without straggling branches and the heavy buds are dense. THC content can vary widely according to growing method, ranging from a lowish five percent to a healthy 15 percent.

Outdoors, Hollands Hope seeds will grow best on an enriched, healthy soil in a sheltered spot that gets as much sun as possible. That said, even in poor summers, growers should see a decent crop with harvest coming in late September to early October. What makes this strain a favorite of growers in colder climates is its ability to thrive in damp conditions.

Indoors, the plant thrives with the SCROG method with either hydro or soil. Careful indoor growing will give specimens at the higher end of the THC range. Flowering time is seven to eight weeks and yields are around 500 grams per square metre.

Hollands Hope is a hardy plant ideally suited for growing outdoors in countries like the UK and the Netherlands. Its ease of growth makes it a good choice for the novice horticulturist and its relatively light stone makes it a smoke-anytime kind of weed.